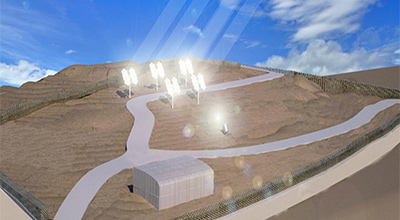 The first phase of the CSP-DSW project comprises of a comprehensive techno-economic feasibility study for the creation of a pilot (demonstration) plant will utilize solar power technology and tested desalination methods in a more efficient and environmental-friendly combined thermodynamical cycle for the production of water and simultaneous production of economically competitive, green energy. With the completion of the feasibility study, an implementation design will be proposed for the pilot plant that is best suited to Cyprus’ needs and conditions. The second phase of the project is comprised by the actual installation of the plant that will be used to further advance the concept, engineering and optimize the use of this technology. The third and final phase will see the deployment of the refined technology plants for heavy-load commercial operation.

The first phase of the project which was formally launched in the fall of 2008, will last 16 months. The Government of Cyprus has fully endorsed this project. Specifically, the President of the Republic of Cyprus H.E. Mr. Demetris Christofias declared (to the local press and in official EU meetings) the intention of the government to invest 18m Euros taken from the European Structural Funds to construct a prototype desalination unit that will be driven by solar-thermal power. The President of the Republic has chosen the CSP-DSW project to present as Cyprus’ major efforts in renewable energy at the Union for the Mediterranean (UfM) summit convened in Paris (July 13th 2008). In his presentation, he designated the CSP-DSW project as “strategic” for the UfM.

The CSP-DSW project’s importance is highlighted by the fact that although it belongs to the EEWRC, it is steered by the CyI President’s Office, and Prof. C. N. Papanicolas acts as Principal Investigator.